Who Is Your Spirit Animal?

How to Meet Your Spirit Animal

In the Reluctant Medium, reporter Rachel Blackstone didn’t go looking for her spirit animal, it came to her. It first appeared the evening she attempted the ceremony to return the dead. She heard it howling in her neighborhood where there are no wolves. And then later, she saw it for the first time on a deserted highway in the middle of the night. At first, it frightened her, but later she began to realize it probably didn’t mean her harm—but did it mean to be helpful? 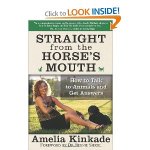 We all have spirit animals. You may already know yours. If not and you’d like to, there is a wonderful exercise in Amelia Kinkade’s book Straight from the Horse’s Mouth. It’s called “Contacting Your Spirit Guide” in Chapter 3. I like her books about animal communication very much. When I did the exercise, I visualized going inside a cave and following the twisting corridors underground. You can imagine this however you like. Kinkade gives you several options.

Eventually, I came to an opening or portal where I left the cave and entered a clearing in the woods. To one side of this lovely opening in the forest was a boulder, perfect for sitting. I observed the stream bubble nearby. I marveled at the full moon and the passing clouds, the many stars watching over me.

Kinkade tells you to wait for your spirit animal, rather than go looking for it. It might fly out of the trees, hop out of the stream, or appear in your sanctuary. Mine came out of the trees. While I was certain it would be some kind of cat or a horse, I was wrong. It was a wolf. And because I am familiar with this creature now, I gave my character a wolf spirit animal too.

You may find as times passes, that you have secondary spirit animals. These may help you in different ways. You may already know them. Is there a particular bird, insect or reptile you click with? Do you trap and carry out insects from your home? I keep a glass that I can carefully place over the insect, slide a small piece of cardboard or envelope under it and then release the bug outside. Gandhi said: “The greatness of a nation and its moral progress can be judged by the way its animals are treated.” I extend that to bugs too.

There are other books about spirit animals. I also like Animal-Speak: The Spiritual & Magical Powers of Creatures Great & Small by Ted Andrews. He also does the exercise, but I thought Kinkade did a longer, more detailed one. But Andrews, who has written other books on spirit guides and related subjects, describes animal, bird, insect and reptile totems. He describes the wolf as a guardian who is ritualistic, loyal and spiritual. The wolf’s power is constant especially during the full moon.

Another source I like is Medicine Cards by Jamie Sams and David Carson. It comes with animal cards. I’m so glad I bought their Medicine Cards Just For Today when they first came out. You might locate some used ones on the internet. Every day I choose a card and they have some words of wisdom. For instance, the swan card says: “Accept the gift of grace/ Surrender to the flow/ Don’t give up—give over.” I love beginning my day with these Medicine Cards. 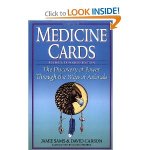 Because the wolf is a teacher and pathfinder, if I were lost, I would look out for a wolf to give me directions. For our Reluctant Medium, her wolf is white and sometimes glows. Although she is uncomfortable with having a spirit animal, she begins to realize that his many gifts might help her along the way. Look for more of Rachel’s wolf guide in the forthcoming Lemurian Medium. She faces challenges for which she is unprepared and her wolf will be there to help out whenever he is needed.

I hope you enjoy discovering your spirit animal.

This site uses Akismet to reduce spam. Learn how your comment data is processed.